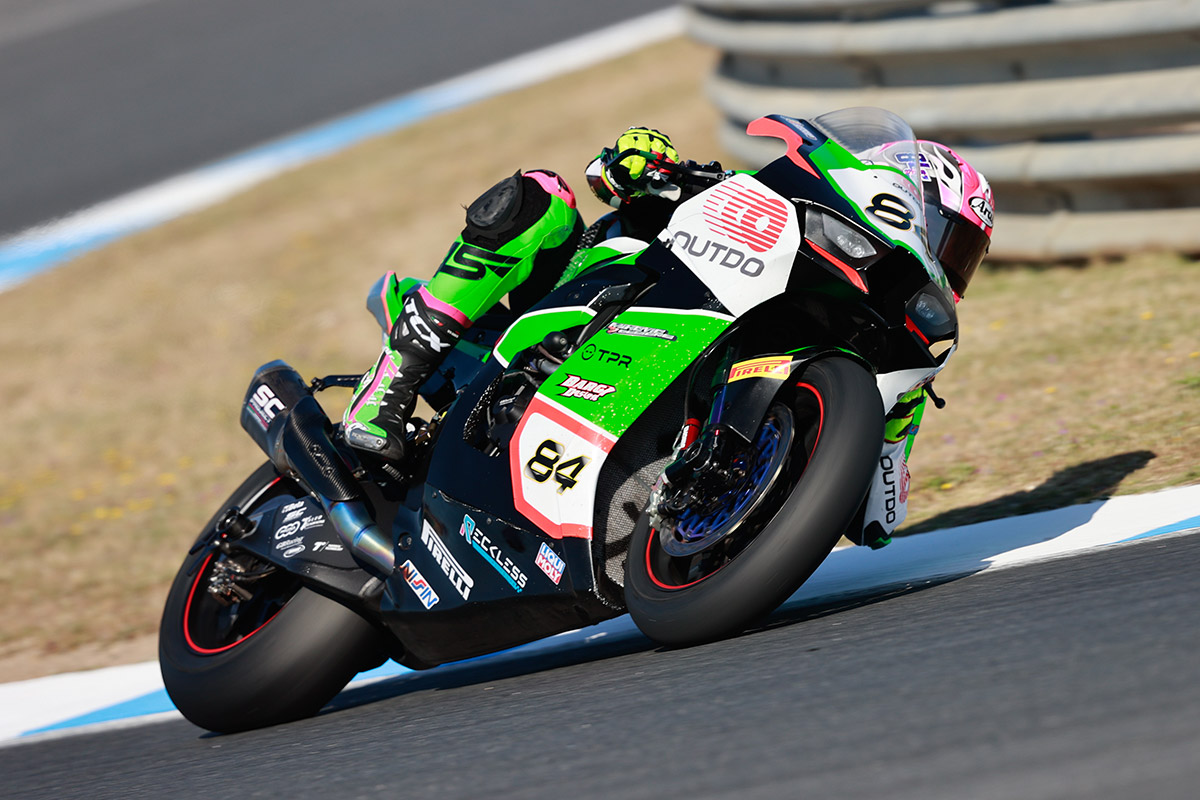 TPR Team Pedercini have concluded the second round of the 2021 FIM Superbike World Championship at Estoril in Portugal with both riders improving throughout the weekend, Loris Cresson securing his best race finish in terms of gap to the front.

Knowing that the back-to-back event, following the season opener in Spain last weekend would again be treated like a ‘test at the race’, both riders, together with the entire Pedercini squad, set about improving both the feeling and the performance of the machines that are at Loris Cresson and Samuele Cavalieri’s disposal.

Working through some small electronics issues, both Loris and Samuele were able to post their best laps of the weekend in Superpole, with Loris going on to finish Race 1 in twentieth position. Samuele unfortunately slid out of contention on Lap 5. Sunday saw both riders further improve in Warm-Up, with Loris racing to nineteenth and eighteenth positions in the Superpole Race and Race 2, Samuele unfortunately retiring from both races following an un-fixable issue.

The team will now regroup ahead of their home race at the Misano World Circuit Marco Simoncelli in Italy, in a couple of weeks.

Loris Cresson:
“The weekend started positively despite some issues during FP1. Nevertheless, we were able to make some steps in the afternoon on Friday. Saturday overall was not so bad. We keep making laps and this allows us to understand the new bike more. We made a change for the race, but it didn’t really work as I wanted. The lap times in Race 1 was consistent and we were a similar gap to the front as we were in Aragon. Overnight we made some more changes, and we were able make a really good step. We found something and I am sure that this is the right path that we need to take. It was a bit lonely in the Superpole race but in Race 2 I was able to match others around me and we made a really big jump forward which meant a race time of over twenty-five seconds faster than yesterday. A big thanks to the team for all their work. I am looking forward to Misano.”

Samuele Cavalieri:
“It was my first-time riding at Estoril. I really like the circuit; it is a difficult but has an old style which I like a lot. I was able to make a lot of laps to understand the circuit, but we had a few small problems in the second Free Practice session. We made some small steps in Superpole but in the race we had an electronic problem which caused me to crash. It was a day to forget but the team and I were determined to work hard overnight to make sure we had a better Sunday. Unfortunately for me, the problem that we had on Saturday returned and although we improved lap by lap, we were unable to finish any of the races. We will see in two weeks what we can do at my home race in Misano. I want to say a big thanks to the team for their hard work and for never giving up. We go again in my home race!”

Lucio Pedercini – Team Manager:
“We knew that this race would be like in Aragon, a test under race conditions. We were unable to test over the winter and everything arrived late so for all of us we expected it to be a tough event. I am happy to see the big steps made by both riders and to see both Loris and Samuele improve with each session. This is positive and we will keep working. A big thanks to the team and all of our sponsors who believe in our project. We have two young riders with no Superbike experience, and we will continue to keep helping them, starting with our home race at Misano. I would like to finish by sending the deepest condolences from all of us at TPR Pedercini Racing following the passing of Moto3 rider Jason Dupasquier.”