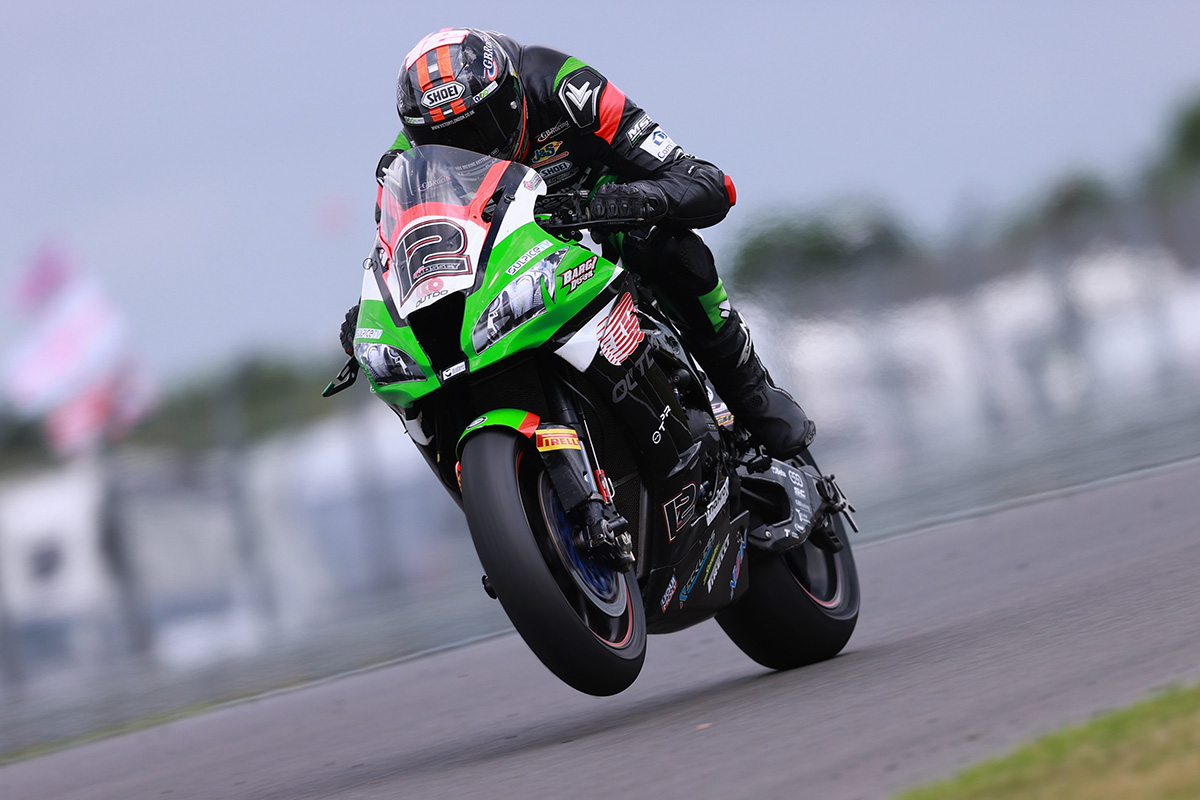 The Outdo TPR Team Pedercini squad were back in action at the latest round of the FIM Superbike World Championship at Donington Park, securing their first points of the season thanks to the efforts of Luke Mossey. Loris Cresson also achieved a career best finish in the series, just missing out on a maiden WorldSBK point in Saturday’s opening race.

Sunday saw rain falling between the morning warm-up and the ‘sprint’ race with both riders electing for wet tyres, a decision that proved to be the wrong way to gamble. In Race 2, both riders were able to complete the race with a good feeling, with once again Luke close to the point scoring positions and Loris once again inside the Top 20.

The results at Donington Park underline the fact that the team’s hard work is paying off and also the fact the decision by Lucio Pedercini – the Team Principal – to nurture young upcoming talent is the right one if you look at the lap times of the front running riders and the improvement by the new names fielded in WorldSBK by Outdo TPR Team Pedercini.

The team now heads to the TT Circuit Assen in the Netherlands for Round 5.

Luke Mossey:
“It was nice to get some points on the board for the team and to have something to build on for Sunday. We had no testing as I was asked to ride quite late, so we decided not to change too much for the Superpole race and Race 2 because it was more a case of me trying to adapt. I was able to improve my feeling and lap times on Sunday, but the weather played a big part today. I am happy to be able to score points for the team and thank them for the opportunity to race for them again.

Loris Cresson:
“Saturday was frustrating but also rewarding. It was hard to understand everything in the rain in the morning as the circuit is quite slippery, but I was able to improve in Superpole. I decided to go with full slick tyres for the race which was the right decision. I got held up behind a rider and lost some time but was then able to really find my rhythm once I was able to pass him. I was close to the points, but I made a mistake and lost the chance to finish P15. Nevertheless, it was a positive step forward and I was confident for Sunday. In the Superpole race I went with the wet tyre, and we know now that this was a mistake. It was one of those things that sometimes you get right and sometimes you don’t. In Race 2 tried a slightly different setting and it wasn’t ideal. I also got held up by the same rider as Saturday but overall, I am happy and looking forward to Assen.”