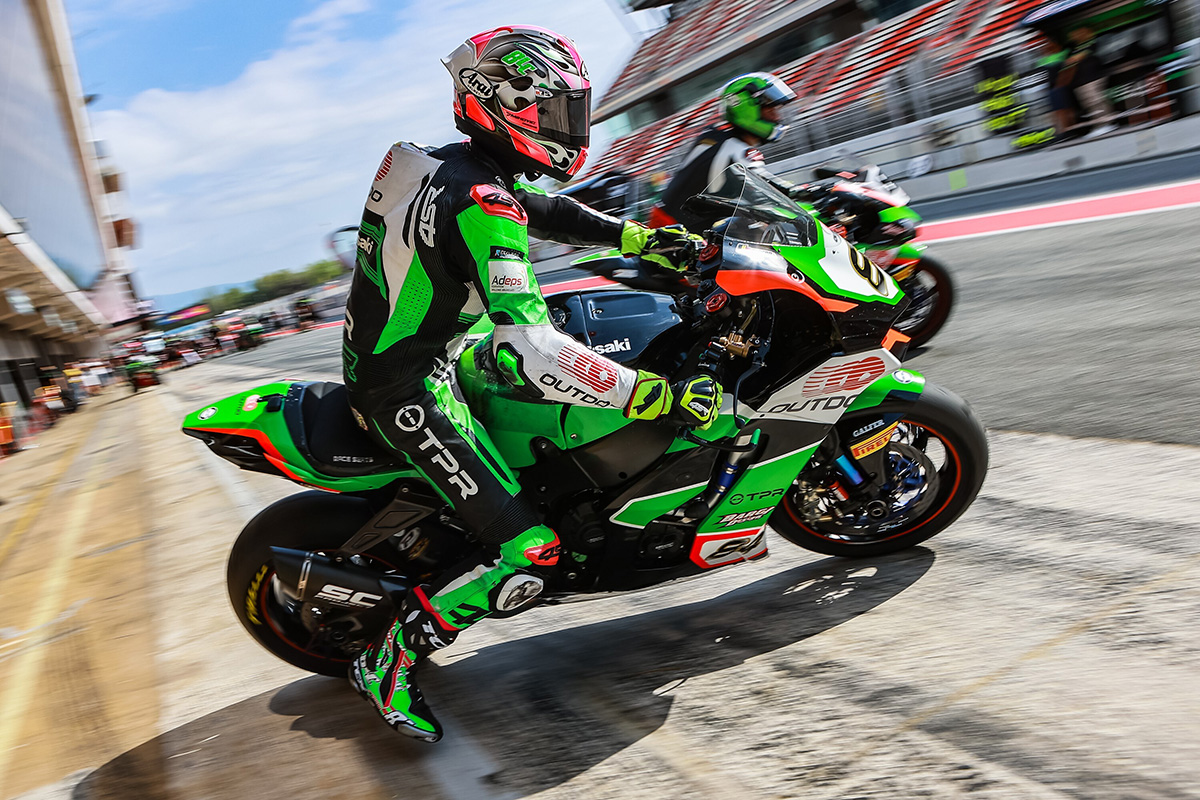 Outdo Team Pedercini Racing were back in action at the latest round of the FIM Superbike World Championship this weekend at the Circuit de Barcelona-Catalunya, their riders Loris Cresson, Lachlan Epis and Johan Gimbert racing hard throughout the weekend in both WorldSBK and WorldSSP300.

The 2.9-mile circuit which was added to the World Superbike calendar last year always makes for great racing and this season was no exception.

In WorldSBK both Loris Cresson and debutant in the category Lachlan Epis improved throughout the weekend. Cresson achieved a best result of P14 in Sunday morning’s Superpole race, with Epis also producing his best result of the weekend in the same race – he finished P18.

There is no time rest for the team who remain in Spain for the next round of the series in Jerez this coming weekend.

Johan Gimbert:
“I crashed in qualifying which put me back on the grid but in Race 1 I was able to make a good start. I made some mistakes but then the feeling came. I was close to the top ten and lost a bit of time after touching with another rider. I gave it everything again on Sunday and it was a tough race. There were over twenty guys together. Overall, a good weekend and I am ready for Jerez.”

Loris Cresson:
“I was able to improve despite a mistake on my fast lap in qualifying. For Race 1 the rain came but we were able to fight with a few riders in the early stages. Towards the end of the race my tyre was destroyed but it was a good experience in the wet conditions. The Superpole race went quite well, and we improved a lot. I was confident for Race 2, but we suffered a drop off with the tyre and lost a lot of time. We then had a problem with the traction control, and I had to retire. On one hand it’s not the result we wanted or deserved but we can make up for it in Jerez in a week.”

Lachlan Epis:
“Firstly I want to say sorry to Alex (Lowes). By the time Jonas (Folger) had decided which way he was going it was too late for me to avoid him at the start of Race 2. Aside from that it was a challenging weekend. I hadn’t been on a bike since June in Australia and there was a lot to learn. Race 1 was wet, and it was my first time riding the Kawasaki in these conditions. I didn’t have the confidence to push as I wanted to, but we brought it home in one piece which was the target. I didn’t feel so bad in the Superpole race, and I am happy with the step we made. I tried to make the restart in Race 2 after the initial incident, but I had to wear a set of Loris’s leathers which was also a bit strange. He is a lot smaller than me, and it was ultimately just too difficult to ride in his suit. Overall, I am pleased with the weekend and looking forward to riding again on Friday in Jerez.”